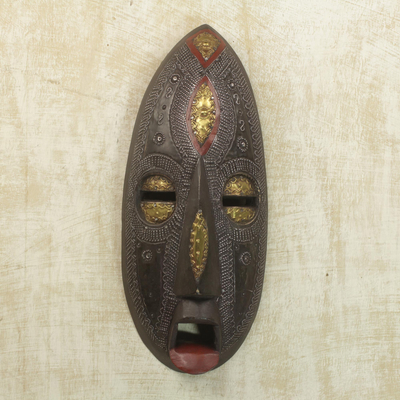 With narrowed eyes that discern people's motives, this handsome visage speaks out boldly. Godfred France creates the beautiful African mask in an original design he names Zuba, "Faithfulness" in the Hausa language. "There is a lot of mistrust in the world today and I designed this mask to express the need to be faithful to one another," the artisan confides.

I especially love the use of embossed metal and display it proudly with other Novica-purchased masks from other African countries. In fact, I loved this and the other three Ive displayed together so much that I printed a picture of them to display on my office wall.

I am in love with my new gift. It arrived quicker than I expected it to, well packaged and looks just like the picture. Its giving good energy and good vibes.

"Traditional presence in my space..."

I love my new masks!!! They are beautifully-crafted. Shipment was fast and the masks were well-protected. I recommend this artisan!

"Strong presence in my studio space!"

I love the presence my new masks bring to my workspace!!! They are beautifully-crafted. Shipment was fast and the masks were well-protected. I recommend this artisan!

This mask is made with quality and the colors are so vibrant!

I ve been in love with Africa since I visited a few years back. I regretted not buying a mask then and have been looking for the perfect one ever since. I found this one and it now hangs over the entry door to my home making me feel safe and secure! It s beautiful and I m so happy!

You can find our ghanaian wood mask 'Be Faithful' by Godfred France in masks categories such as Ghanaian Masks and Wood Masks. Enjoy exploring these sections for other Novica treasures.

Godfred supports himself and five others in his family. Since the majority of his family's income comes from NOVICA, each order helps improve their livelihoods.

Godfred France has received 10 microcredit loans with 0% interest from Kiva and Novica, the first for $450 and the most recent for $900. Proceeds were used to invest in the purchase of wood, metal plates and sandpaper for production.

With his sales from NOVICA, Godfred is able to support the education of his three children as well as the daughters of his deceased sisters.

This artist is an elder master and continues to actively practice their craft.

"My dream is to one day have a big workshop to train a lot of people – especially school dropouts who think life has ended. Their success in the art of carving would be my legacy."

“I am a producer of home decor items. In the beginning, finding a market to sell these crafts was a big challenge, until NOVICA came along. A global marketplace where art can be displayed; it was such a relief.

“There have been incremental changes in my business and finances over the years. Catering for my children's education has been one of my successes; currently all my children are about to graduate from tertiary institutions. I have also been able to train close to 20 artisans since I started the art business.

“My major challenge in my craft is the aspect of a carver not being trustworthy.It delays my work, and as a result I can’t always meet deadlines. Carvers take my money in hopes that they will carve out my designs, but later they keep postponing the work.

“I have maintained the same workplace since I joined NOVICA, but my wings have expanded to include other artists around my community. I have people who work for me doing metal finishing. After joining NOVICA, my life has been more comfortable and largely improved. I have had a lot of recommendations from other artisans, and my main aim is to give back to society; that is, to train more and more artisans.”

"I was born May 25, 1966 in Accra. My creativity seems to be inborn. During my childhood days, I'd create boats with worn-out metal utensils, which I'd float in water to play with my friends. I could also mold pots and animal creatures from clay, to the delight of family members.

"Due to financial constraints, my parents could not further my education and so after the 6th grade, I had to drop out of school and join my uncle, who was a wood carver.

"Since 1983, I myself have been into this art of carving. I was determined to make it even though I could not further my education. And God has been so good – I had the opportunity to sell my works to foreigners who visited the country on holidays. The only challenge then was due to difficulty in communicating; I found it difficult to correspond with my customers to get feedback on the designs they purchased. Those who returned in subsequent years told us how they would best like the carvings and this helped us to improve our quality. However my sales were slow because, except for tourists, our local folks did not show much interest in our art.

"I have trained about 30 people to carve and some of them have now set up their own workshops. I currently have five people working with me. In addition, some university students have spent their vacations with me as interns. We take them through the practical aspects of this craft, and the students carve beautiful designs.

"Thanks to the woodcarving art, I've been able to educate my four children and I know that with constant sales, I'll be able to give them a brighter future than I had. This motivates me to wake up each day to carve!

"My dream is to one day have a big workshop to train a lot of people – especially school dropouts who think life has ended because their parents couldn't further their education. Their success in the art of carving would be my legacy."
View all