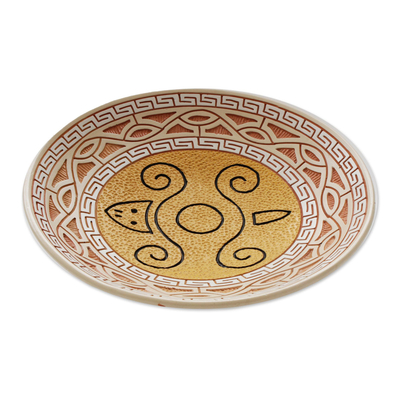 By Brazilian artisan Doca Leite, this beautiful decorative bowl preserves the ceramic art of the ancient Marajoara people. At the center, a turtle glyph is featured, surrounded by intricate patterns and motifs that decorate the centerpiece's exterior. Crafted of ceramic, this decorative bowl stands atop three feet.

My son married a beautiful lady from Brazil last year and they had their first child a few days before her birthday in December so we missed celebrating her day because of that and the pandemic. So for her birthday I wanted to get her something to remind her of her country. When I found this vase I thought it was perfect, not to mention how beautiful I thought it was. It arrived before Christmas and she was delighted. The handwritten note in Portuguese was a special touch. The vase arrived in perfect condition and looks beautiful in her home. Thank you. Ill be looking forward to more purchases in the future.

"From this art, I could earn a livelihood, raise my children and, most important, preserve the legacy of an ancient culture."

Doca Leite was born in the northern state of Para. His interest in pottery started very early. "I began going to see people work in a workshop near my house. I saw how they crafted ceramics and was very excited with the process," he says.

Over time, he was trained and hired there. "At the time, I was paid by the piece, not with a salary as is customary today. In 1983, I started my own pottery workshop and began crafting Brazil's legendary Marajoara ceramics."

From that moment, he began growing as an artisan and, in 2006, was awarded the title of "Brazil's Number One Artisan" in the prestigious Top 100 Artisans competition. This is the most important award given by Sebrae, a Brazilian institution that supports micro and small entrepreneurs.

Dating from 350 to 1400 AD, the pre-Hispanic Marajoara culture was identified at the end of 19th century and a wealth of highly developed ceramics were found in archaeological excavations on Marajo Island near the mouth of the Amazon River.

Doca Leite is a very talented artisan who has dedicated his career to preserving the Marajoara ceramic art tradition. His designs are appreciated all over Brazil and abroad.

"The process of creating my pottery begins with digging clay in the streams of the Paracuri neighborhood. It undergoes a cleaning process and the removal of air to obtain a more homogeneous material. After these steps, a vase or a pot is shaped and placed in the shade to dry for seven days. Then, it is taken to be decorated with both high and low relief designs. And finally, the parts are fired at a temperature of 850º C. If necessary, after being fired, it is painted by hand. And the result is a beautiful piece of craftsmanship that can last for many years.

"The best thing that happened in my life was pottery — it gave me everything! I've always worked with ceramics and, from this art, I could earn a livelihood, raise my children and, most important, preserve the legacy of an ancient culture."
View all