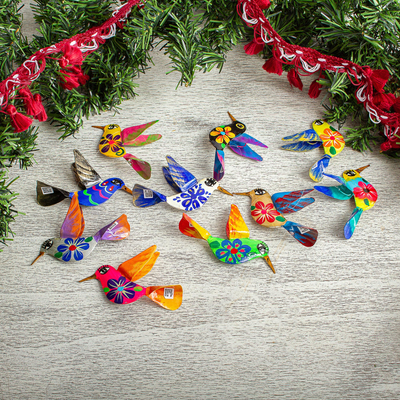 (8)
Bright and busy, hummingbirds hover on a decorative garland by Jaime Hernandez.... more

This item is available for backorder and will ship within 2 to 4 weeks. Read more

This item is available for pre-order and will ship within 2 to 4 weeks. Read more

Bright and busy, hummingbirds hover on a decorative garland by Jaime Hernandez. The birds are painted by hand in brilliant color with cheerful floral motifs so that each one has its own personality.

While the picture included gives an idea of the vibrant color and composition, this piece really makes the space in our home office come alive and is in particular one of my wifes favorite decorations!

"So beautiful! Painted just for me"

Many thanks, Jaime! I was delighted to open my box today. The hummingbirds I received are incredible... It is as if Jaime painted them all just for me. Mine are even more beautiful than the ones pictured -- each one is unique. Now I want to buy more them to give away as gifts and keep these for myself (My plan is to turn them into individual ornaments - Definitely keeping three that are so very special). I was first introduced to Jaimes work by another Fair Trade seller (I bought three of his free standing small tin birds to give as gifts from that seller). Hurry and buy his hummingbirds now as his work sells quickly.

I love the details of my birds and have them hanging in my art studio.

they are so beautiful. I originally thought Id use them as a garland for special occasions, but now have the hanging so we can see them every day.

As adorable as the photos of Festive Doves show it to be ... The name and photos do not do it justice. These colorful metal birds will adorn any thing you wish to adorn 3

"My offering for my uncles ofrenda"

My cousin has constructed an ofrenda for his father and this little beauty was my addition to it along with an album from a singer he liked. Beautiful way to remember our loved ones who have passed. This is small but well crafted. It has a flat back so it can either lay on a table or be hung on a wall.

The artisan also wants to go back to making traditional designs such as relics and religious art in order to protect these for future generations… For Jaime, metal art is a way of life.

Jaime Hernandez Cruz was born in Michoacan but has lived in Guanajuato since 2010. When he was 12, he began to work in his brother-in-law's papier maché workshop.

Eventually, Jaime opened his own workshop with his wife, Alejandra, and their children.

Based on his experience with papier maché, he began to use his ideas and techniques with metal to create his own designs. He selects bright and vivid colors in an unusual Mexican style. His niches, roosters, lamps, and hearts are quite unique and bring his imagined images to life.

The artisan also wants to go back to making traditional designs such as relics and religious art in order to protect these for future generations. Without a doubt, one of the least known — yet most beautiful — folk art forms of Mexico is tin work. Known by the people who work it as "the noble metal" or "the silver of the poor," tin has been molded, stamped, perforated and cut into a wide variety of artwork.

Mexican artisans have specialized in combining elements to create their unique works of art. The origins of perforated metals seem to have been lost over time. For Jaime, metal art is a way of life and he is proud to create original designs born of his infinite inspiration.

His work has been seen in the US, Australia, Chile, Italy, Holland, Japan and, of course, in Mexico. He has won a number of awards and is listed in the book Arts of Mexico in the edition devoted to traditional toys.