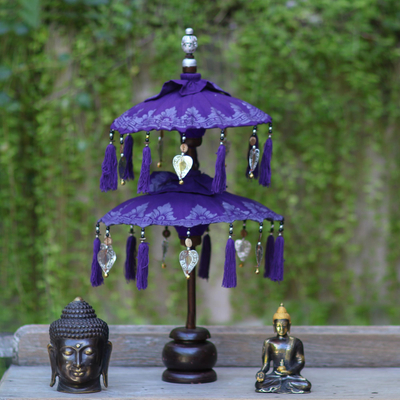 (1)
This unique Balinese umbrella will be an interesting conversation piece in any... more

This unique Balinese umbrella will be an interesting conversation piece in any home. Crafted by Rinni, it replicates the kind of parasol that would be used for ceremonies and in sacred places in Bali. The artisan uses blue-violet cotton and native suar wood to create the small parasol, adding festive tassels, aluminum ornaments, beads and jingling bells. The parasol arrives with a wood base for display.

I love the color of this umbrella. It s perfect for a Buddhist shrine, or any shrine.

“My name is Nengah Rinni and I was born in 1983. I was born in Karangasem, Bali, a village which is still green and full of culture. My parents worked as farmers and also as traditional umbrella makers. I am the fifth child of five children. And ever since I was a small kid, my parents taught me how to make traditional umbrellas. Besides learning to make umbrellas, I also liked to play around in nature with my friends. I grew up in my small village, and attended school there until senior high school.

“Now I am married and have two children, one son and one daughter. A lot has changed since I became a mother. I feel I have more responsibilities, based on my love for them. It feels like as a parent I need to provide them with the best things I can give. My husband and I, we agree to be the best parents we can be.

“As a human being, sometimes I feel bored with the routine and things that are going on. Usually, when boredom hits me, I do a hobby like exercising. I love doing aerobic exercise. It clears my mind and my body. Sometimes when time allows, I also enjoy traveling around Bali. Sometimes alone; sometimes with the family. Traveling with the family is fun to do. There are a lot of things I can introduce to my children.