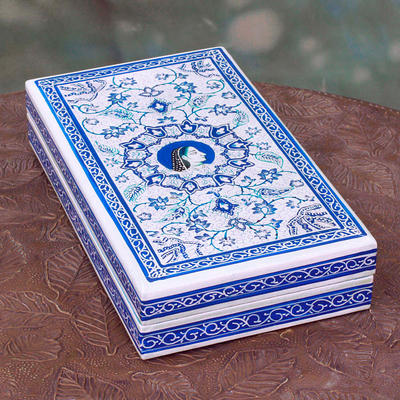 (17)
This wood and papier mache box exemplifies the magnificence of the Mughal era.... more

This wood and papier mache box exemplifies the magnificence of the Mughal era. Indian artisan Riyas creates this design by using the papier mache process on kail wood and then decorating the exterior using oil paints. The painted design portrays the Mughal queen in the center of the lid, surrounded by intricately-formed vines. The sides feature additional vine details. Inside, the box is lined with black velvet for added protection of valuables.

These are so incredibly beautiful. So much prettier than pictured

I used these as teacher gifts for Christmas. They re substantial enough that a single ornament is a nice gift (I included a gift card in each box too!). So pretty and unique.

Just as beautiful in person as they are in the picture. A nice decoration to display in February as well as December. Love the variety in the colors and patterns.

Vivid ornaments for the tree.

These ornaments are beautifully done! I?m Saving them for gifts next year...but REALLY want to keep them for myself. I love them!

"Perfect for the Christmas ornament exchange"

Loved to bring something that was unique and handcrafted and supported a good cause. It was a sought after ornament.

You can find our wood and papier mache box 'Queen's Grandeur' by Riyas in decor accessories categories such as Floral Decorative Boxes, Wood Decorative Boxes and Papier Mache Decorative Boxes. Enjoy exploring these sections for other Novica treasures.

"Those days were so much fun! On one side my father would be creating his magic on shawls, while us brothers would show our creativity through paper mache."

I was born and brought up in Kashmir. As you know, Kashmir is known for its natural beauty and traditional crafts, so it was indeed fun growing up there. My father was a traditional weaver and I remember he would make exquisite embroidered compositions on shawls.

My older brother Iqbal was taught papier mache techniques by a highly skilled craftsman by the name of Gulam and, as I watched him learn, I became interested too. Then I began to learn and, soon after, my younger siblings followed suit. Those days were so much fun! On one side, my father would be creating his magic on shawls, while we brothers would show our creativity through papier mache. My uncle Niyaz is also a featured artist specializing in paper mache.

It is unfortunate that none of us inherited our dad's passion for weaving. My father is old now and he doesn't work anymore, but he is happy that we are enjoying our work. He always says, 'No matter what craft you chose, you should be happy doing it.'

When I finished my 12th standard, I joined my brother in his work. After making the boxes we would sell them to tourists. Back then, Kashmir used to be flooded with tourists but these days, the situation doesnt allow too many visitors.

We also started teaching young boys the art of papier mache. Between 1993 and 1994, we moved to Delhi to explore more opportunities. We started by participating in several government-sponsored exhibitions. People loved our work.

We're always trying to bring something new to our art. Earlier, papier mache was mostly about scenic and animal themes. However, as per shoppers' demands, we are always doing something new. The Mughal-themed boxes that we create have been widely appreciated. They are our specialty.

Iqbal was conferred the National Award in 2004, and I was also honored with two State Awards in 2004 and 2006. It's such a great feeling to be appreciated for your hard work. We were also chosen by the Craft Council of India to participate in an exhibition in Cuba. It was a wonderful experience!

Being associated with you is a great experience. My craft will be exhibited for the world to see and appreciate!
View all