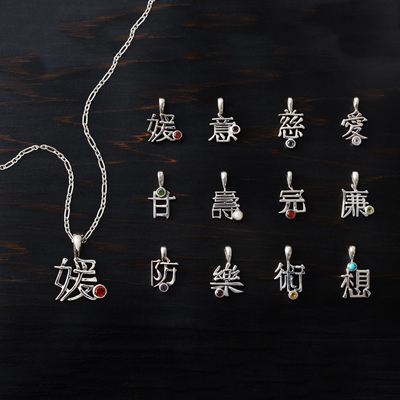 Hanzi are characters used in Chinese writing. As early as the sixth century... more

This item is available for backorder and will ship within 2 to 4 weeks. Read more

This item is available for pre-order and will ship within 2 to 4 weeks. Read more

Hanzi are characters used in Chinese writing. As early as the sixth century A.D., many of these characters began to be simplified and adopted into Japanese writing, where they're known as kanji, a term that is more widely used in the West. Artisans in Yiwu, China, create these pendants by using sterling silver and the lost-wax casting method. Each character emulates the sweeping brushstrokes of traditional calligraphy. Choose based on birth month, favorite color, or simply the symbol that resonates with you most.

necklace was completely oxidized...still wiping with a Haggerty silver cleaning wipe - Not happy

Great gift! I have a friend who saw mine and is buying 3 for herself, daughter and grand daughter.

I purchased this for everyday wear, it goes with all outfits. I have my favorite green stone as my birthstone, emerald and the charm that I purchased is the closest I could get. It is certainly charming.

I ordered two of these for our granddaughters for Christmas. They arrived in a timely manner. The designs are very pretty on a nice silver chain, but you really have to search to find the birthstones. I had hoped that they would be something the girls could wear up into their teens but now Im not so sure. Ill give them to the girls and hope for the best.

"Not What I Expected from Nat Geo"

This necklace was to be a present for my son. I was so disappointed in the quality that I returned it. I often shop National Geographic and thought the poor quality is not the norm for Nat Geo. I also saw the same product offered by another company. One of the reasons I shop Nat Geo is for the uniqueness of your merchandise. I was sorely disappointed.

Great as gifts Good quality Could be a bit bigger

"Kanji for each month of the year"

Perfect gift for a granddaughter who is studying Chinese language. very nice quality and good value for the price.

The chain is low quality an easily breakable.

"would not buy this again"

It is very pretty. Bought it for my daughter who is studying Japanese (language and culture) and she loves it. It was a bit bigger than I expected it to be, but still small enough for her dainty neck! It was a great birthday gift and she loved it.

I would like to warn potential buyers as a fluent speaker of Japanese that the meanings are not correct and the descriptions in the catalogue are not aligned with the image. December is the only correctly described, defined, and placed month. I especially warn against the second to last, which is labeled as November in the catalogue and has peridot (so probably intended as August and therefore supposedly Purity) because the character ? literally means cheap. Please be careful when buying items with characters you cannot read, especially as a gift. This could lead to serious embarrassment for all involved.