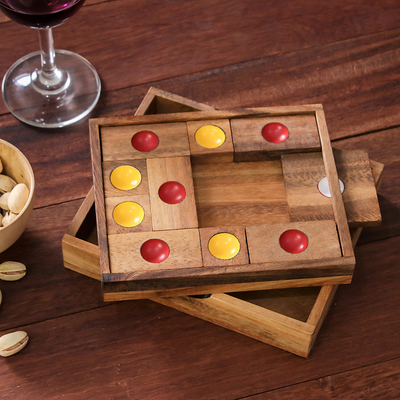 Thai artisan Waraporn Khamsuk bases this creative puzzle on the famous Thai legend of Khun-Phan, who was imprisoned under the watch of nine guards. In the game, Khun-Phan is represented by the large square with the white dot, and each of his guards is represented by a small piece marked with a red or yellow dot. The goal of the game is to help Khun-Phan escape through the opening on one end of the box without removing any of the guards from the board. Handcrafted out of rain tree wood, the game comes with nine variations that have different degrees of difficulty.

You can find wood puzzle 'Escape' by Waraporn Khamsuk in chess sets games categories such as Wood Chess Sets Games and Puzzles Chess Sets Games. Enjoy exploring these sections for other Novica treasures.

Waraporn has grown her passion for wooden puzzle games into a successful workshop. She employs a number of artisans and has expanded her range from puzzles to wooden tableware.

Through personal dedication and increased access to the global market that Novica provides, Waraporn has been able to increase her sales. The steady income from Novica sales has been instrumental in providing the stability that she needs to continue moving-up.

Waraporn is grateful to be able to help educate her brother. He recently began to study at the university.

This artist shows a lot of talent or potential and is in their late teens or twenties.

Waraporn Khamsuk has received a $1400 microcredit loan with 0% interest.

"My favorites are the wooden games because I grew up with them. They teach me to think, plan and concentrate, and I apply these skills in my everyday life."

"I'm Waraporn Khamsuk and I was born in 1990 in Northern Thailand. I'm the eldest daughter in the family, and I grew up with the wooden games my father crafted. I'd watch him select wood, dry it naturally and assemble to complete a game. They are challenging and fun — something you'll never find in computer games.

"My father founded our family's game workshop. At one time, he worked at a factory that produced bamboo skewers for meatballs. Then, the factory began to take orders for wooden games, and my father was allowed to work from home to earn extra income.

"The factory saw that he put his best efforts into creating games that needed careful crafting of wooden joints. It was completely different from making skewers, which is repetitious as they are all the same.

"When he didn't have any orders from the factory, he began creating new games. Then, he started to gain his own customers.

"He created brain teasers, interlocking puzzles and wooden board games.

"My favorites are the wooden games because I grew up with them. They teach me to think, plan and concentrate, and I apply these skills in my everyday life. Although technology has taken over life today, I'm still charmed by wooden games.

"Creating them and crafting them are the precious legacy my father left me. He died in an accident in 2012 while I was at the university. I dedicated all of my spare time to keeping our workshop going.

"Along with the wooden games, we now craft wooden tableware. People appreciate the beauty and the uniqueness of the natural wood pattern.

"I studied how to design plates and was guided in this by the artisans who work with us. We don't use any artificial or chemical finishes to our tableware. The more a piece is used and washed, the more beautiful it becomes, especially when food is arranged over it."