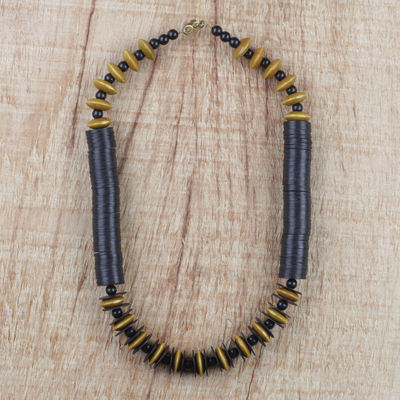 Ghanaian artisan Elizabeth Alorchie-Apetor creates this lovely necklace using beads of sese wood and recycled plastic. The artisan threads the beads by hand in an eye-catching pattern, creating a bold contrast between the shades of brown and black.

This bracelet gets all the compliments. Its a conversation starter. I love it with everything. The first day I received it, I hated to take it off.

Each bead is beautiful and its a subtle statement piece. Love it.

"This is a lovely bracelet!"

The seeds and balls are all polished to a high shine, it fits well, and the pouch it came in is delightfully colorful!

WELL PUT TOGETHER NECKLACE, WITH A HINT OF SKY BLUE TO CATCH THE EYE, ONLY NECKLACE FOR ME, SO I WILL WEAR IT WITH THE RIGHT COORDINATIONS.

This bracelet is a beautiful piece of art to wear on your arm. No one else will have anything like this and you will get a lot of compliments. The wooden beads are a rich chocolate brown.

You can find our wood and recycled plastic beaded necklace 'Bold Earth' by Elizabeth Alorchie-Apetor in jewelry categories such as Eco-Friendly Necklaces, No Stone Necklaces, Wood Necklaces, Plastic Necklaces and Bead Necklaces. Enjoy exploring these sections for other Novica treasures.

This Product is awarded the Earth Friendly badge because it uses recycled or sustainable materials or techniques.

""The lesson I have learned in life is that one must know what he or she likes and just stand firm and follow it with grace."

"I'm Elizabeth, from Accra and I am a respectful, God fearing, patient person who easily makes friends. I come from a family where most of the women's business is threading traditional beads. My mum was no exception. I was attracted to this craft by the manner and passion with which she threaded beads. When I was nine years old she took me gradually through the different threading stages. I could only string a strand together and put it around my neck. I enjoyed doing this so much so, that when I returned from school, I would work with beads for at least two hours before my studies.

"When I grew up, I worked as a civil servant for twenty one years. Then one day, when I was 43 years old, I decided to work on my own. I realized I was leaving home as early as 5:30 am and returning at 8 pm, denying my children and family of that special care and attention.

"At first I thought of working with African apparel, woodcraft, and baskets. I had everything prepared so that when I stopped working, I would have something I could depend on. When I finally left the job, I started displaying my goods on a table top at an art market in Accra. For three months, I sold not a pesewa, but I did not give up.

"On the fourth month my sales went up and I was happy with what I was doing. By the seventh month I acquired a space at the market to build a shop. But then one morning, when I was bringing with me the wood and roofing sheets to build my shop, I found that the government task force had scattered everything at the art Market. I had to quickly pick up what was left of my merchandise.

"I was considering again what to do, when a family friend introduced me to the women's association she belonged to. On my first visit I was asked what I was into, and I quickly replied that I am a beaded jewelry designer. This response brought back the memories of the skills I had acquired and abandoned for years.

"By the time I got back home I told my husband that I had finally figured out what I wanted to do. He gave me an initial capital of GHC 30.00 (approximately 20 dollars) to start my beaded jewelry venture. I came up with beautifully designed beads which attracted many customers, and their compliments encouraged me to work hard and craft more. I am inspired to take bead stringing beyond the level my mum could achieve.

"In the earlier days I used mainly Czech beads but now glass beads are made locally which are available for purchase on the market. I also use natural materials such as wood, clay, coconut shell and stone, as well as recycled plastic and metals.

"I have trained four people, of which two are women that are physically challenged and now work for themselves. I presently have two trainees. During vacations I also trained all my sons and daughters, as well as other dependents so they have something to do. My daughter and third son have shown a keen interest to take over from me sometime in the future. They help me occasionally when the need arises.

" I currently sell my beads to local shops and fairs, but my hopes and plans are to be a big-time producer and exporter of beads. My major challenge has been market outlets for my beads. Samuel Lovi introduced me to Novica, where he is a featured artist.

"The lesson I have learned in life is that one must know what he or she likes and just stand firm and follow it with grace.

"I thank the Almighty God for the gift of designing and making jewelry with beads."
View all