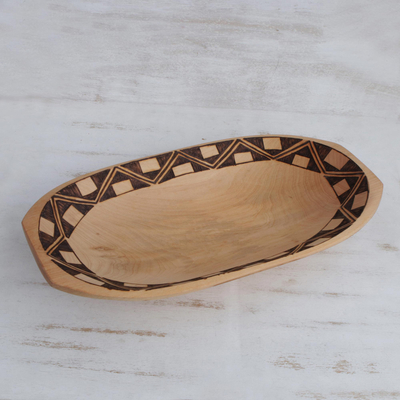 (1)
Working with marupa wood, artisans of the Pataxó Indigenous Community in Brazil... more

Get it before Mother's Day [more info]

Working with marupa wood, artisans of the Pataxó Indigenous Community in Brazil create this striking decorative bowl. The elongated wood bowl features a geometric border pattern that is burned into the wood. The Pataxó are an indigenous people of Brazil who are struggling to hang onto their traditional lands.

Very unique and well made. It does sound like frogs had to play with it. Would make a unique gift. Happy with my purchase. Plan on purchasing more items from these artisans.

"Pataxó handcrafts are an important source of the community's livelihood and they are usually sold to tourists visiting the area. With the pandemic, tourists are not coming."

"The Pataxó Indigenous community lives in villages in the southern part of the Brazilian state of Bahia, some near to tourist areas. The mother village of Barra Velha has existed for nearly two and a half centuries. The contact with non-Indigenous people goes back to the sixteenth century, and often they were forced to hide their customs.

"Nowadays, the Pataxó strive to revive their language—the Patxôha—being taught at many Pataxó Indigenous schools, but they all speak Portuguese.

"For centuries, the Pataxó have been struggling for the possession of their traditional lands. Even though it is established in Brazil's constitution, the claimed demarcation has been pending for decades and they are facing the invasion of ranchers and gunmen, resulting in murders of their leadership and other members of the community.

"In 1999, the Pataxó occupied the Monte Pascoal National Park, an important part of their traditional territory. At this moment in 2020, the situation is becoming harder as the current government is clearly against the Indigenous reserves.

"Pataxó handcrafts are an important source of the community's livelihood and they are usually sold to tourists visiting the area. With the pandemic, tourists are not coming and the opportunity to sell their work to you was of great help.

"Tigê, a Pataxó leader, is coordinating the communication with the indigenous artisans, collecting the items from the villages and shipping them to us."