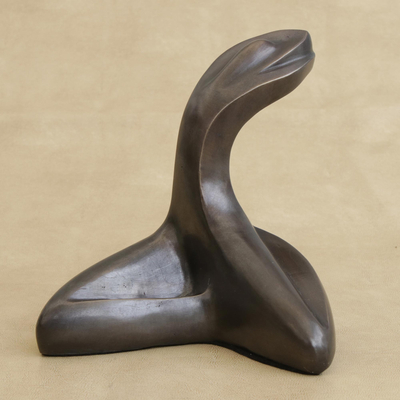 (4)
Legs curled underneath, a woman sensually wraps her arms around her head as she... more

Legs curled underneath, a woman sensually wraps her arms around her head as she arches backward. Sculpted in darkly oxidized bronze, this elegant nude exudes sensuality, grace and beauty. Jaqueline Cavalcanti celebrates woman with this exquisite sculpture.

"A touch of romance"

The statue exceeded my expectations. It was packed well, shipped efficiently, and beautiful

This piece is more beautiful than I can describe in words. It really is a piece of art and I have already purchased another item from Jaqueline.

Love For Ever, Handcrafted Love-Themed Bronze Sculpture from Brazil

I purchased this sculpture for my husband for our 30th wedding anniversary and couldn't be more impressed with the quality and beauty of this piece. My husband actually had tears in his eyes when he saw it's beauty. This is a romantic embrace of two lovers and it represented our love for each other over the years. Thank you Jaqueline for creating such a lovely piece and may you enjoy creating more beautiful pieces for more customers.

Jaqueline Cavalcanti has received 3 microcredit loans with 0% interest from Kiva and Novica, the first for $600 and the most recent for $550.

"Among the themes in my work, woman is one of the most appealing. The feminine body allows countless aesthetic possibilities…."

"I believe that the gift of sculpting is a talent that showed itself as a game during my childhood - it was totally subconscious. Only after I was married and expecting my first son, about 1988, I began to hear an internal call toward art. I felt something lacking and my hands gave constant signs of restlessness. Advised by a friend, I took a few sculpture classes and this led me on a long, internal journey.

"Forms appeared in clay without any forethought, and the subconscious was my main source. With the aid of teachers and with a personal commitment to perfecting my artistic expression, my work began to develop and gain ground. My rational side impelled me to look for technical and theoretical information, while my emotional side provided content for the creation of new pieces. This was a great internal discovery that brought me enormous satisfaction and a sense of accomplishment.

"The first material that I tried was bronze, a dense and strong material that allowed me to create long, linear forms. Later, I started to cast in resin, a lighter material that permitted more robust forms and also offered transparency in the pieces. It was after discovering resin that I launched a line of utilitarian objects that maintain the sculpture concept. There I could experiment with a more abstract line without entirely losing the figurative reference.

"Among the themes in my work, woman is one of the most appealing. The feminine body allows countless aesthetic possibilities even when the artist deforms it, as with my elongated figures that maintain their grace and harmony.

"I believe that by exhibiting my pieces with Novica, an immeasurable number of people can come to know my work and that represents expanding my borders beyond Brazil."
View all