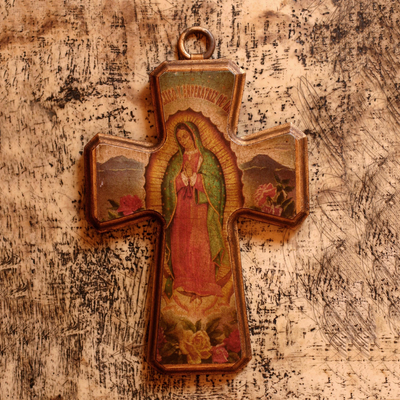 5.0 (artist rating)
Highly revered and beloved by the Mexican people, the Virgin of Guadalupe... more

Highly revered and beloved by the Mexican people, the Virgin of Guadalupe inspires Ana Maria Gonzalez to create a collection of decoupage crosses in her honor. In 1999, Pope John Paul II named Our Lady of Guadalupe patron saint of the Americas, and she is celebrated on December 12. Her well-known image miraculously appeared on the Saint Juan Diego's robe, where he was carrying Castilian roses as proof of her appearance to him. Guadalupe sent him to the Spanish bishop to convince him to a build a church in her honor. For this cross, Gonzalez selects the banner that proclaims her as Reina de Mexico y Emperatriz de las Americas, (Queen of Mexico and Empress of the Americas).

Ana Maria Gonzalez has received 5 microcredit loans with 0% interest from Kiva and Novica, the first for $1600 and the most recent for $3400. Proceeds were used to purchase wood, paints, and solvents to increase production.

This artist striving to supporting their own or their family's basic needs and improve their livelihood.

"My designs reveal a tiny bit of Mexico that I carry in my heart."

"My husband Ariel and I have worked together with NOVICA since 2004. We began right after moving from Matamoros. We discovered NOVICA at a craft show where we were exhibiting our work. At first, we experimented with several different crafting techniques such as stoneware ceramics. We wanted to see if we could grow with each technique. This is how we eventually arrived at decoupage.

"Decoupage isn't complicated, which lets us focus more on quality and increase the variety of our designs. In this way, our workshop achieved a great workflow and, with NOVICA, our income began to grow. For us, NOVICA is a word-class marketplace that we appreciate and is, in fact, the basis of our day-to-day work.

"A challenge that arose was our capacity to create what we'd imagined, but we entered into a pact with our assistants. We needed to provide them with more training and help them feel an enthusiasm for their work each day.

"It was NOVICA that taught us about the needs of international shoppers and helped us reach that level of quality."

“Hi, I'm Ana Maria, and I was born and raised in Tonalá, Jalisco. Since I can remember, I have been in contact with crafts, because my entire family in one way or another was producing something. So when I went to visit family, I ended up making things with my cousins.

“First the pinewood box is made, sanded and detailed. To decorate it, I print different motifs, cutting them to the size of the box. I glue and paste everything very carefully, and then give it an antiqued finish with a mixture that I make at home from chapopote and wax. My products show a little piece of Tonalá that I carry inside my heart…”

so beautifully well made Virgin of Guadalupe box!

I just received this beautiful Artisan Crafted Christianity Wood Cross, 'Guadalupe Queen of Heaven I was amazed to see a wonderful job. I will give this present to my god son for his baptism in December. Thank You Ana Maria Gonzalez for creating an amazing wood cross. greeting Rocio Rendon