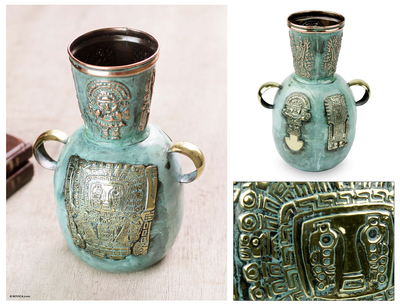 Gleaming golden color defines the intricate Raimondi stela. Named for Antonio Raimondi, who discovered it, it depicts a deity from the Chavin culture known as the smiling god. The original, incised composition embodies duality within a figure, in this case an agricultural and fertility deity with splayed taloned feet. Depicted in a vase by Ana Maria Enciso, the deity holds two tall staffs. The original is housed in the National Museum of Anthropology and Archaeology in Lima. The vessel also depicts a ceremonial tumi blade and the deity Wiracocha.

You can find copper and bronze vase 'Proud Empire' by Ana Maria Enciso in vases categories such as Archaeological Vases, Inca Vases, Copper Vases and Bronze Vases. Enjoy exploring these sections for other Novica treasures.

Ana Maria Enciso has received 7 microcredit loans with 0% interest from Kiva and Novica, the first for $850 and the most recent for $600. Proceeds were used to buy copper and bronze to continue crafting her designs.

This artist is an elder master and continues to actively practice their craft.

"In my work I seek to recover the folklore and joy of the Andean people."

"I was born on April 17, 1952. For 24 years I have dedicated myself to metalwork in the city where I got married to an able smith, from whom I learned the art of working with silver and plaques. Today we have a small family business, in which my children are also involved, and we work together with dedication, constantly developing new products.

"What inspires me on a daily basis is the endless desire to improve personally and economically. In my work I seek to recover the folklore and joy of the Andean people. My products have been exhibited in craft fairs in Spain, Colombia, Argentina, and Mexico, receiving a warm welcome and a grateful impression among the people who have appreciated my work."

Gave the plate to my husband for a Christmas gift, and he is so pleased with it - it is hung in a place of honor where he looks at it every day.

I have many pieces by Ana Maria Enciso. They are flawlessly crafted and stunning in their beauty. Such craftsmanship is unusual in today's marketplace.

I purchased one of Ana Maria's beautiful masks some time ago and it remains one of my most cherished decor items! I just looked at her products and am delighted to find she has created many additional art pieces! I look forward to purchasing more in the future! Ana Maria, I love the colors and metals you use, the craftmanship, and the rich heritage your work represents, in addition to your affordable prices! Thank you for your gift! All the best! Sharon