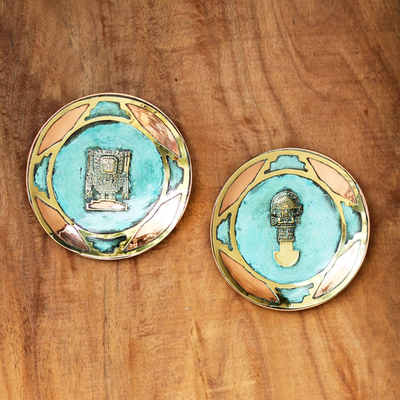 Angel Franco honors Peru's cultural legacy through his admirable artistry with galvanized copper and bronze. He crafts two highly detailed decorative plates featuring important images from the Inca Era. On the right is the tumi knife featuring a deity over a rounded blade. It was used for rituals during the Inti Raymi ceremonies in honor of the sun, after the maize harvest. On the left is Wiracocha, the Inca lord creator, the supreme deity in the Inca Pantheon. He is also regarded as the substance from which all things are created.

"Metal work has been part of Peruvian culture since before the Incas. It is an inheritance that my father taught me and I have taught my children. In our workshop, we make many replicas of Inca and traditional Peruvian art. We use brass, copper and silver like our ancestors did. This keeps our culture alive."

Angel still supports most of his family. He provides for his own wife and the wife of his eldest son. He pays for the education of his children. His Novica sales enable him to do so, providing a steady source of income for the family.

Angel Franco has received 5 microcredit loans with 0% interest from Kiva and Novica, the first for $600 and the most recent for $2000. Proceeds were used to invest in a bulk purchase of bronze and copper for his metalwork.

Angel has four children. His eldest son is unable to pay for the education of his two daughters. Angel provides for his granddaughters' education.

"What I want to transmit is everything that ancient Peruvian cultures left for the world – I want everyone to know these great artisans and their creations."

"I was born January 27, 1949 in Parinacochas, Ayacucho where I grew up with my parents and siblings. My father was a goldsmith and I inherited my love for art from him.

"I married very young so I had to start working on my own. I kept all this from my family and, when they found out about it, they kicked me out of the house. So I found a job in the workshop of an acquaintance. I didn't have any tools and the person that helped me tremendously was a friend who gave me great support.

"One of my favorite hobbies is traveling, getting to know my own country as well as other countries and their cultures.

"I'd describe my art as a way of capturing all my effort and dedication toward my family. I began working to provide for them and I continue to do so. What motivates me is that I want to learn more about my ancestors and our cultural legacy. What I want to transmit is everything that ancient Peruvian cultures left for the world – I want everyone to know these great artisans and their creations.

"This art means a lot in my life – it is how I support my family and is also my passion. My greatest challenge is to always give my all for my family and to understand my wife so as to be a good example to our children.

"Thank you for putting your faith in artisans and our completely handmade creations. I send you a big hug and may God bless you."

Angel's craftsmanship is astounding; I will have to purchase from him again!

Mr. Franco's ""Chavin Personage"" provides a gleaming glimpse into ancient art. The workmanship and quality of materials are exceptional. What really makes the piece shine for me is how the ambient evening light catches the copper and brass features and brings them to life. It's very easy to imagine these bits of artistry ""watching"" a house's inhabitants by firelight while night storms bellow outside.