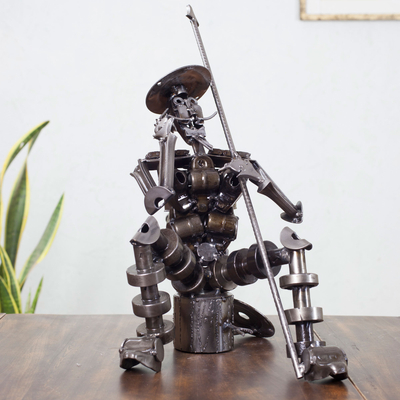 Eternally romantic, Don Quixote pines after his beloved Dulcinea after battling windmills he believed were giants. An admirable character in Spanish literature, Don Quixote was created by Miguel de Cervantes de Saavedra, inspiring this endearing sculpture by Armando Ramírez. As ingenious as this millenary personage, Ramírez recycles several auto parts into a vivid sculpture including a generator cap for the helmet, connecting rod for his back, a thick wire for the lance, Bendix pieces for the legs, and a rocker arm for Quixote's chest. Ramírez also gives use to discarded pieces off a die machine, wires, and a small tricycle rim for the shield.

You can find auto parts sculpture 'Ingenious Don Quixote' by Armando Ramirez in sculpture categories such as Recycled Metal Sculpture, Eco-Friendly Sculpture and Metal Sculpture. Enjoy exploring these sections for other Novica treasures.

This artist is currently confronting a major life challenge.

Armando Ramirez has received 3 microcredit loans with 0% interest from Kiva and Novica, the first for $3500 and the most recent for $4000. Proceeds were used to buy materials and also a machine for soldering his metal art.

Armando has received 1st place from the regional contest of the Jaliscience Institute of Crafts for his sculptures.

Armando's income helps pay for the education of his two daughters.

This Product is awarded the Earth Friendly badge because it uses recycled or sustainable materials or techniques.

“As a child I enjoyed inventing toys, and soon yearned to create a unique style of art. Environmentally enamored, I now transform recycled goods.”

"I've been working with NOVICA now since 2002 and I consider the team as part of my own family. I had the privilege of having one of the directors explain the project to me.

"When I first set up my workshop, sales were slow. But every member of the NOVICA team showed me an incredible support and I found strength and faith in knowing that my work was being shared.

"The changes were obvious – we had to train the people who assist me and pay them better to overcome the challenges that arose along the way. My workshop became a formal and well-organized place to create and we improved the quality of our work as well as the tools to craft each of our designs.

"We're still working in the same workshop where we began but we've expanded the work space and are growing as needed to keep up with the demands for our sculptures, chess sets and decor accents.

"We've faced significant challenges over these years. One I remember most was the supply of our materials. Once I was about to replenish designs for NOVICA and the pieces I used as the base of my sculptures were out of stock. I looked in a number of other places but wasn't able to find what I needed. I was told these pieces sold out easily here in the state, so I began seeking out suppliers from all over Mexico.

"In addition to the automotive and bicycle parts and scraps from die-cut metal, I've begun using pieces from suppliers that dismantle firearms. Our standardizing of each sculpture is much better organized. I'm very pleased to have definitively formalized my workshop.

"Today, I'm studying fine arts at the University of Guadalajara. My idea is that this will let me greatly expand my creativity."

"Hi, I'm Armando Ramírez. All my life, I've lived in a town of artisans, and this has motivated me to create new art. As a child I enjoyed inventing toys, and soon yearned to create a unique style of art. Environmentally enamored, I now transform recycled goods.”

"At first, little by little, I began to craft figures from scraps and discarded mechanical parts – mostly from cars and bicycles. And so I began to create sculptures, soldering the pieces together and giving them shape as I imagined they should look.

"The process involves selecting recycled items that can be used. I separate them and soak them in a cleaning solution to remove any impurities. I solder them together until I achieve my design, then I give it a protective coat of glossy varnish.

"My sculptures are so successful that today I sell only my own works. They are rustic in nature, designed to recycle discarded objects by converting them into art. Thanks to the creativity that God gave me, today I have an enjoyable and better way of life.

The attention to detail and creativity is stunning! I love my piece and will order another one. The perfect gift for the adventurer!

I received the package and the item was so much bigger and heavier than I thought it would be! So brilliantly put together, Armando did a great job! This is artwork in it's greatest form! Armando put so much time into this piece that I'm surprised I got it for such a great price... I WILL buy more from him, and this will be a center-piece displayed and talked about as long as I'm here on this earth. THANK YOU ARMANDO!

I purchased the Architect for my father for Christmas. The quality was amazing and it is very unique. He absolutely loved it. Thank you so much!!