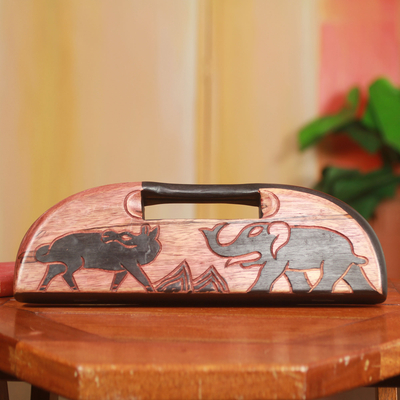 (24)
An African elephant and a dog challenge each other in a friendly game of oware... more

An African elephant and a dog challenge each other in a friendly game of oware on a board designed with a practical handle. From Ernestina Oppong Asante, the oware board is carved by hand of seasoned sese wood and the game is played with 48 white marbles.

Oware is a game of skill and strategy designed for two players, challenging mental agility and alertness. The objective can be briefly described as 'counting and capturing beads' and there are no chance factors in it. The player's strategy entirely depends upon the ability for reasoning and counting.

Oware is one of the oldest games in the world. The earliest records describing the game were found in Arab religious texts dating to the Middle Ages, believing the game originated in the Middle East and spread from there to Africa, then to Asia with Arab traders, and to the Caribbean around 1640 via the African slave trade. Other experts place its origins in Central Africa; the Masai people state that oware was invented by Sindillo, the son of the first man, Maitoumbe, and was originally called "geshe."

In Arab countries, the most common name for this game is "mancala" (Arabic word meaning "to move"). In some West African countries the depressions in the board are referred to as "warri" or "wwari," which means houses, thus the name "owari." In Nigeria it is known as "adi," which is also the name of the seeds used to play it; and in South Africa it is called "ohoro." With different and exotic names such as "congklak," "dakon," "aggalacang" and "nogarata," it has also been played in Asia long before the Portuguese rounded the southern tip of Africa.

Today, oware represents the diversity of Africa, as some version of it is played in nearly every country on the continent. Legend relates that Shyaam aMbul aNgoong, founder of the Kuba kingdom of Central Africa, taught the game to his people to encourage foresight and calculation.

Having transcended the passing of the centuries, oware has been enjoyed as a family game, a ceremonial right of passage, or as a form of recreation among friends. It would be hard to find a greater challenge of mathematics, or a more attractive one.

The detail and colors come alive. This is a very very nice piece

This was a gift and the person loves it.

"This is used at my NonProfit -African Djembe.org"

We at the AfricanDjembe.org love and cherish this product used as one of the first to teach our children of African and Indigenous descent about the history of African Drums. Founder & CEO Safiyyah R. Muhammad african djembe.org@gmail.com

I ADORE this chair. I use it as my resting chair in my living room (Im tiny), yet also put it out in the garden during the summer (tho I would not leave it out in the sun or rain, of course) . Dont leave this beauty in your cart or someone will get it. Someone spent a great deal of time carefully carving and polishing this and it shows!! PLEASE, PLEASE make an adult version of this chair. I would certainly buy it.

"This will make a fine addition to my sons collect"

A finely made mask of sense wood. Beautifully painted and a lovely addition to my sons collection.

Ernestina supports and provides for her grandchildren's education.

Ernestina Oppong Asante has received 9 microcredit loans with 0% interest from Kiva and Novica, the first for $1600 and the most recent for $800. Proceeds were used to invest in the purchase of wood and paints, as well as leather for the drums.

"Though carving has long been regarded as the preserve of men, I'm glad that I have been able not only to infiltrate but to also make an impact on the trade."

"Prior to working with you, I was selling along the roadside, but now I am in my own shop. One thing I love about you is that you advise artisans so we can grow. I've observed that the quality of my work has improved with your advice. I have also increased the number of designs I have. To a large extent, my sales have increased.

"Growing up, I always dreamed of owning a house of my own and, thanks to your purchases, my dream of building has become a reality. My children have all been seen through school, thanks to you.

Artist and musical instrument maker Ernestina Oppong Assante has been featured in periodicals ranging from Red Herring Magazine to The Christian Science Monitor.

"I was born in the Eastern region of Ghana in 1968, and had my early education there. I trained in dressmaking but, on completion of the course, I realized that the trade would not do well in my town. I therefore decided to learn a popular trade like carving. I trained under Kwame Duah and, within three years, I had perfected the skill and was developing woodcarvings on my own.

"Since 1995, I have been operating a workshop of my own with four people working with me. Fortunately, my husband Daniel Asante also trained as a carver, and so we combine our skills to design and carve the drums with perfection.

"From Nakese in the Eastern region, I acquire a type of hardwood known as tweneboa for carving the drums. For the pegs I use the odum tree. Other materials I use are goatskin, pieces of cloth, iron rods and strings. The wood is already carved into hollows before I buy it.

"I then carve in the adinkra and other symbols and designs. The next stage is to have the apprentices smooth the woodwork with sandpaper. The iron rings which are placed on the mouth of the drum are wrapped with pieces of cloth to prevent rusting. The animal skin is bought from the Northern region of Ghana and its environs. It is soaked in water for about two hours to soften. The skin is firmly pulled through the iron rings to cover the mouth of the drum and this ensures that it comes out with a good sound. The drum is then left in the sun to dry, after which it is tested for sound and tone quality.

"I love making drums. I believe there are very bright prospects for the African traditional drum. Though carving has long been regarded as the preserve of men, I'm glad I have been able not only to infiltrate it but to also make an impact on the trade. For the years that I have been in this craft, I have never had any regrets whatsoever. It is my fervent hope to carve more interesting drums for you to enjoy."
View all