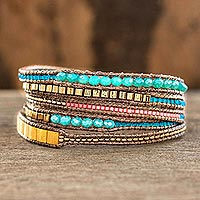 Bought this set for my best friends birthday, it was so beautiful, detailed, and made to perfection. Thank you for having such treasures for us to purchase here on novice

I am so delighted with this necklace and love wearing this freshwater pearl necklace on special occasions... read more

The unique iridescence of pearls has been coveted throughout time and has inspired many different cultural beliefs. Some took them to be teardrops of the moon; others thought they are formed by angels passing through clouds of heaven. At Novica, we believe pearls to be the muse that inspires talented artisans around the world. Visit our collection of Pearl Jewelry Sets to see what we mean.

Once upon a time, Indian rulers considered pearls as symbol of love, union and purity. According to Hindu lore, Lord Vishnu plucked the first pearl from the depths of the ocean for his daughter on her wedding day. In most cultures, pearl jewelry sets are destined to be gifts for her, to be treasured as cherished heirlooms.

There are eight basic shapes of pearls: round, semi-round, button, drop, pear, oval, baroque and circled – most of which we showcase in our Pearl Jewelry Set gallery. Artisans hand-craft each pearl bracelet, necklace, or earring with masterful artistry. They are influenced by their country's past customs and today's vogue.