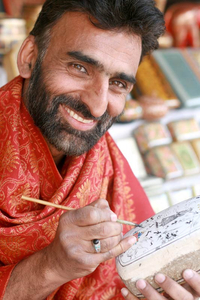 "I remember a time when our family was going through a financial crisis, but father always encouraged us and managed to send us to school."

"Hi, I'm Niyaz from Kashmir, known as 'heaven on earth.' I have fond memories of my childhood, when I felt carefree and wandered about, enjoying the natural beauty of my town. We are a big family comprising of three boys and four girls. My nephew, Riyas, is a Novica-featured artist. My father was a weaver and he really worked hard to bring us up. I remember a time when our family was going through a financial crisis, but father always encouraged us and managed to send us to school. However, I was more interested in learning the rich crafts of our state. The idea that I did not want to study really irked father and so he would scold me.

"One day, when I was about 15 years old, I was venturing out in the open and I saw some amazing papier mache boxes. It was only natural for me to favor papier mache work because in my area, almost every household has someone doing this craft. So I decided to learn it too, with expert artist Syed Aktar, even though no one was doing it. My elder brother and sisters were already into weaving, helping my father.

"I started working on this art and it felt great! I would mostly replicate the traditional patterns and compositions featured in rugs and carpets. My father had a shop where he sold his shawls and scarves, so I would also show my creations there and, since customers loved them, I got really inspired to do more and more.

"I use only natural colors in my work – flowers, leaves, and stone colors are what I use to execute my paintings.

"In the late '90s, I received a letter from the Handicraft Department from the Indian government to participate in an exhibition. I came and the exhibition was a great experience which opened new avenues for me. I decided to open a small workshop in Delhi and so began a new journey for me. I started participating in a lot more government-sponsored exhibitions and in 1993 I received the National Award in papier mache art work. It was a great feeling! I was invited to NIFT (National Institute of Fashion Technology) for a ten-day demonstration program.

"I was also invited to participate in demonstrations and exhibitions in Kuwait, Germany, Sweden, Singapore and Australia. It was always a great feeling and the appreciation I got was always overwhelming.

"Now I am very happy to be associated with Novica."

Your papier mache box 'Kashmir Mandala' is really superb and more beautiful in reality than in picture. Thanks for your work!

I recently purchased your paper mache box Kashmir Kaleidoscope and It arrived today. The detail of the painting on this box is incredibly fine, detailed and delicate. The colors are incredible. I was in India in 2012 and found nothing as fine as the work on this box. Thank you very much Niyaz!